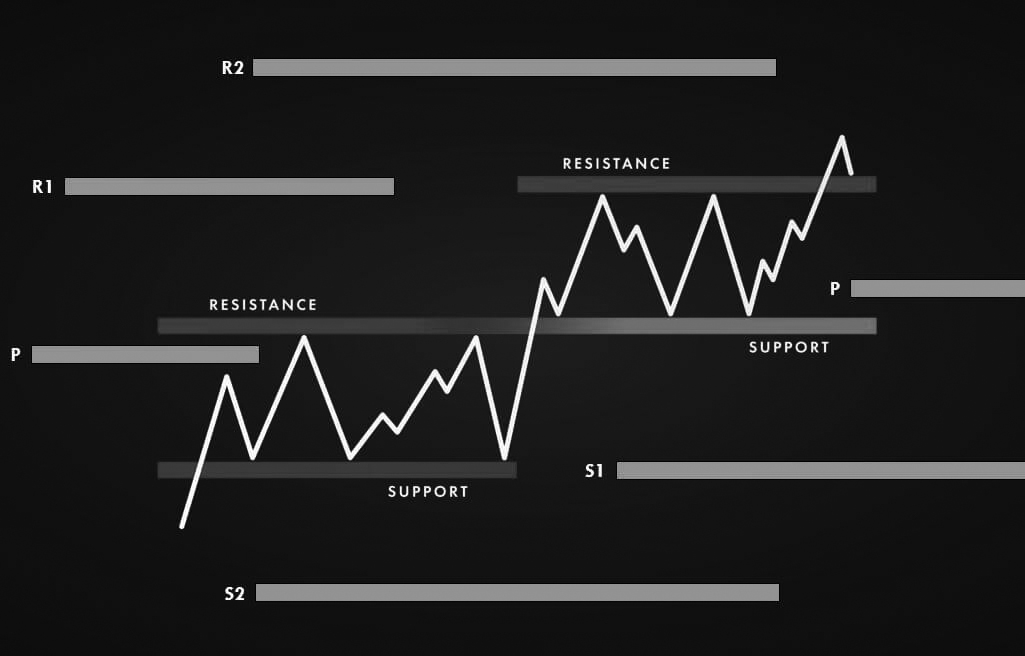 By Georgi Iliev September 6, 2021 No Comments

By using the pivot point and its derivatives can help you to minimize the risk and provides forex traders with potential levels of support and resistance. Using support and resistance as starting points helps determine when to enter the market, stop, and take profits. However, many novice traders shift too much attention to technical indicators, including moving average convergence (MACD) and relative strength index (RSI). Although useful, these indicators fail to identify a point that determines risk. The unknown risk can lead to margin calls, but the calculated risk significantly improves the chances of success in the long run.

The pivot point is used to reflect changes in market movements and to identify general trends over time, as if they were hinges from which trade moves either high or low. Originally used by some traders on stock exchanges and futures, they are now most commonly used in conjunction with support and resistance levels to validate trends and minimize risk.

Like other forms of trend line analysis, the fulcrums focus on the important links between highs, lows and closing prices between trading days; that is, the previous day’s prices are used to calculate the pivot point for the current trading day. Although they can be applied to almost any trading instrument, pivot points have proven to be extremely useful in the foreign exchange (FX) market, especially when trading currency pairs.

Forex markets are very liquid and trade very large volumes, which reduce the impact of market manipulation, which could otherwise hamper the forecasts for support and resistance generated by the pivot points.

While fulcrums are identified on the basis of specific calculations to detect important levels of resistance and support, the levels of support and resistance themselves rely on more subjective placements to identify trading opportunities.

Support and resistance lines are a theoretical construction used to explain traders’ apparent reluctance to push the price of an asset beyond certain points. If the bull trade appears to be rising steadily before stopping and re-tracking / reversing, it is said to have met resistance. If the bear trade appears to have bottomed out at a certain price point before trading consistently again, it is said to have met with support. Traders are looking for prices to break certain levels of support / resistance as a sign of developing new trends and a chance for quick profits. Many trading strategies rely on support / resistance lines.

You can calculate the points of support and resistance between currencies in a forex pair with several formulas. These values can be tracked over time to assess the likelihood of prices passing certain levels. The calculation starts with the prices for the previous day:

Then the estimated support and resistance for the current trading day can be calculated by the pivot point.

To fully understand how well the pivot points can work, compile EUR / USD statistics on how far each high and low level is from each calculated resistance (R1, R2, R3) and support level (S1, S2, S3).

To do the calculation yourself:

Statistics show that the calculated pivot points of S1 and R1 are a decent indicator of the actual high and low of the trading day.

This information is useful for the trader; if you know that the pair slips below S1 44% of the time, you can place a stop below S1 with confidence, understanding that the probability is on your side. In addition, you may want to take a profit just below R1, because you know that the maximum for the day exceeds R1 only 42% of the time. Again, the odds are with you.

The strength of this information lies in the fact that you can confidently assess potential support and resistance ahead of time, have benchmarks for setting stops and limits, and, most importantly, limit risk while putting yourself in a winning position.

The pivot point and its derivatives are potential support and resistance. The examples below show a setting using a pivot point along with the popular RSI oscillator.

This is typically a high reward-to-risk trade. The risk is well-defined due to the recent high (or low for a buy). 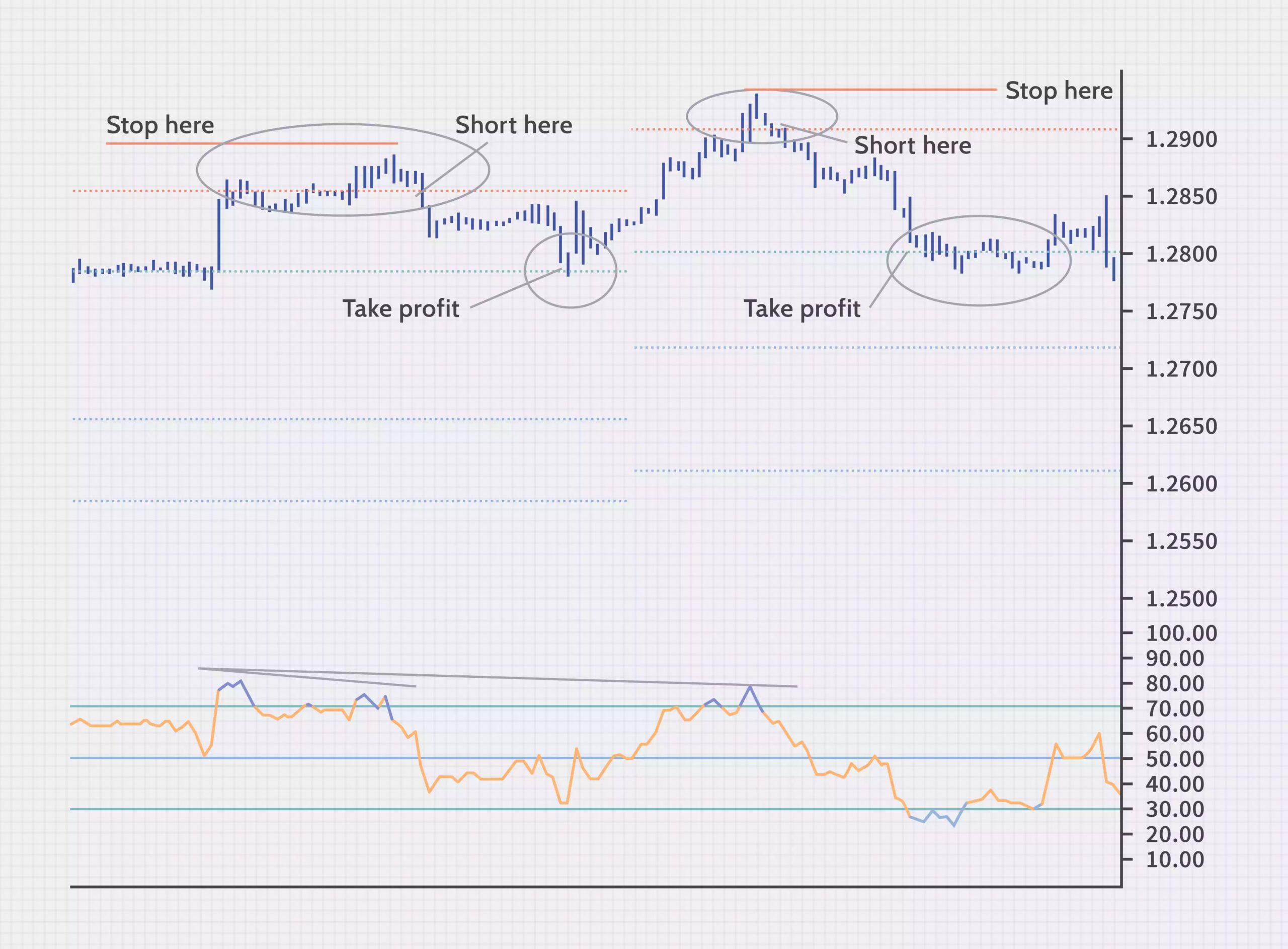 The pivot points in the above examples are calculated using weekly data. The above example shows that from 16 to 17 August R1 behaved as a solid resistance (first round) at 1.2854 and the RSI discrepancy suggests that the increase is limited. This suggests that it is possible to make a short break below R1 with a stop at the recent peak and a limit at the pivot point, which is now the support level:

This first trade netted a profit of 69 pips with a 32 pips risk. The remuneration to risk ratio is 2.16.

The following week produced almost the same setting. The week started with a rally to and just above R1 at 1.2908, which was also accompanied by a bearish discrepancy. The short signal is generated when the drop back below R1, at which point we can sell short with a stop at the recent peak and a limit at the pivot point (which is now support):

This trade made a profit of 105 pips with only 32 pips risk. The remuneration to risk ratio is 3.28.

For bearish and short traders on the market, the approach to determining pivot points is different than for the bullish, long trader.

For a long time

Pivot points are changes in the direction of the market that, when placed sequentially, can be used to detect general price trends. They use the high, low and closing values of the previous period to assess the levels of support or resistance in the near future. In technical analysis, pivot points may be the most commonly used leading indicators. There are many different types of pivot points, each with its own formulas and derivative formulas, but their default trading philosophies are the same.

Pivot points can also indicate, when combined with other technical tools, if there is a large and sudden influx of traders entering the market simultaneously. These market inflows often lead to breakthroughs and profit opportunities for currency traders tied to a range. Pivot points can be used to predict which important price points should be used to enter, exit or place stop losses.

Investors can even use annual data to approximate significant levels for next year. The philosophy of analysis and trade remains the same regardless of the time frame. That is, the calculated pivot points give the trader an idea of where the support and resistance are for the next period, but the trader must always be ready to act – because nothing in trading is more important than readiness.