What is Forex Trading?

With its daily exchange of conversion operations, FOREX (Foreign Exchange abbr.) is the largest and most liquid market in the world. Commercial and central banks, currency exchanges, investment funds, intermediaries, brokers and individuals exchange more than $5 trillion every day. This amount exceeds the turnover even on the stock market. FOREX is all those operations for buying and selling foreign currencies that participants realise under certain conditions. The major currencies traded globally are: EUR, USD, GBP, CHF и JPY.

The Forex market consists of trading pairs of international paper currencies tied to each other, where traders speculate and hedge risk concerning the price of a particular national currency, which is growing or depreciating in relation to another currency.

Interestingly, there is no central forex market, and all deals are open 24 hours a day, more than five days a week when over-the-counter financial centres operate in larger cities around the world.

A brief history of Forex Trading

The main factor in the popularity of the foreign exchange market today is the cash flows that pass through it every day and the availability of opportunity for everyone to participate in some way in their redistribution. However, this requires an understanding of the nature of Forex and the laws under which this market operates. Forming the last is quite a complicated process, closely intertwined with the history of forex in general.

Historically, since the time of Ancient Egypt, the exchange of funds in different currencies has been bound to a stable financial asset, considered as safe money, mainly gold or silver. During the First World War, many countries abandoned the gold standard, and several forex markets emerged on the eve of World War II.

At the end of World War II, the Bretton Woods Agreement was signed in Bretton Woods, New Hampshire, paving the way for a number of events that underpin the international monetary system in its modern concept. It is an international monetary agreement between sovereign states to establish a regulatory financial order, according to which the governments of the US, Canada, Japan, Australia and Western European countries are required to bind their national currencies to gold and exchange rates must be maintained within at 1%.

The absence of banking crises until 1971 shows the effectiveness of the agreement, but the gold standard does not meet the requirements of the economies of developing countries at that time.

That is the reason the world leaders to replace Bretton Woods’ current agreement with a currency system based on the free currency conversion model. This model stops the linkage of the fixed price to the dollar and many other world currencies – with gold. The US dollar has officially become a floating fiat currency and has been accepted as a reserve currency by many foreign countries that today continue to use it as such.

In the absence of a stable price mechanism (i.e. gold), national currencies continuously fluctuate in value relative to each other, creating ideal opportunities for significant market players to earn and hedge the risk of the spread between the currencies.

The concept of Forex – the foreign exchange market – involves the exchange of currency at free prices, which was impossible before the IMF member countries officially refused the gold standard. The official denial dates from 1978, and this date is considered to be the date of the appearance of floating interest rates and the emergence of the main feature of the foreign exchange market – the exchange of currency at free prices.

We will look at the basic terms in the Forex market because without knowing the fundamental concepts, you could not develop further. Once you have mastered the terminology, it will be easier for you as a novice trader to move on to more complex things. So let’s get started.

There are many other currencies, such as the Indian Rupee or Bulgarian Lev, but they are of little interest. Trade is typically performed in the currencies described above.

In the example above, we see a text record of a currency offer, i.e. a currency pair, where the GBP is the base currency, and JPY is called the counter or quote currency. 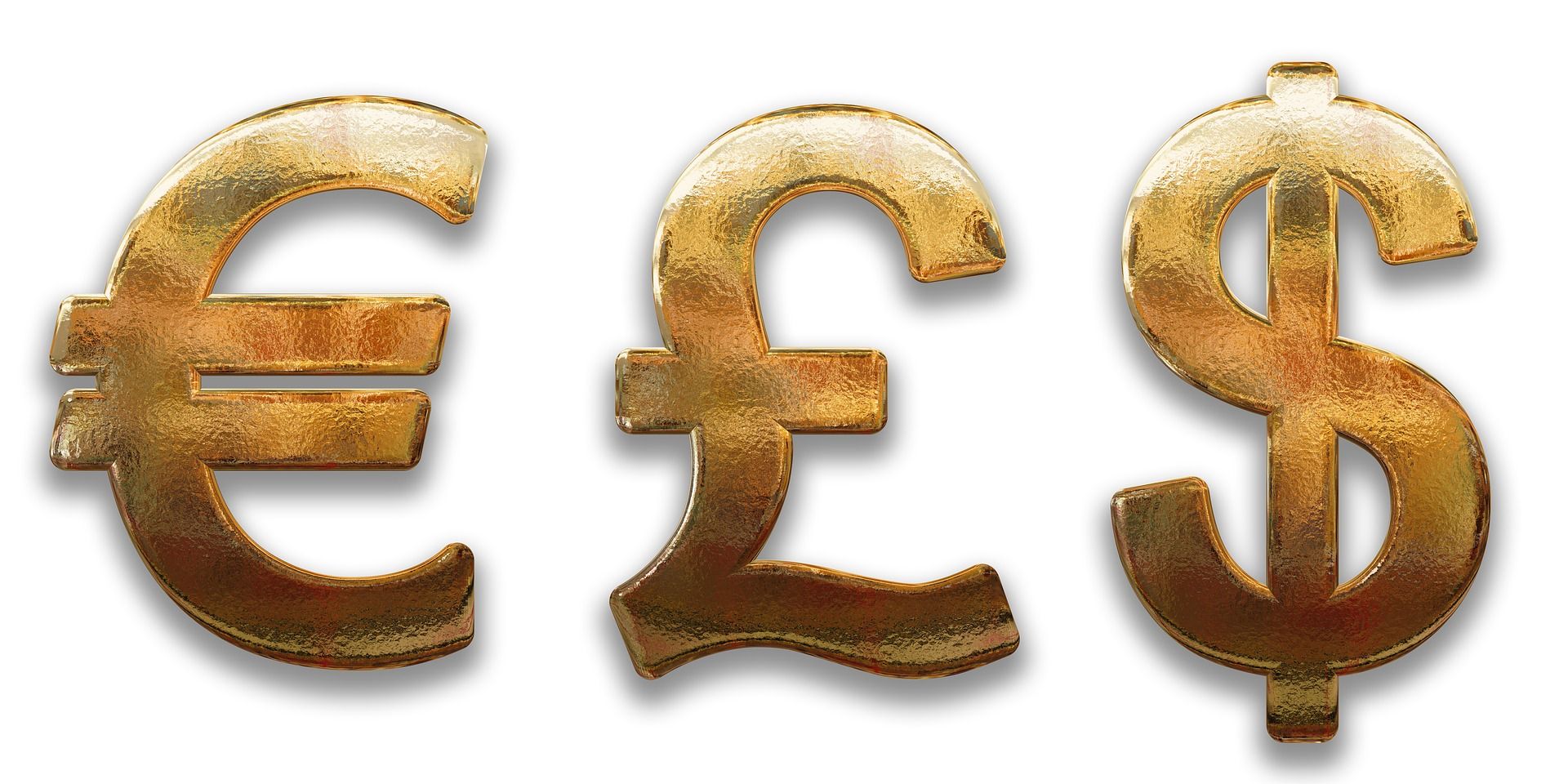 The exchange rate is the price of the currency of one country, expressed in monetary units of another country in currency transactions. The exchange rate can be formed in two ways: based on the ratio of demand and supply of foreign currency in the free market or in an administrative way (usually by the central bank or the government).

Currency Quotation is the establishment (fixation) of the exchange rate of one currency to another in accordance with applicable laws and established practice.

There are three types of currency quotes:

Leverage is the primary tool that allows even the smallest investor to trade currency with only a few dollars. That is a credit lever that increases the merchant’s deposit by the n number of times thanks to a brokerage loan.

The leverage offered by the broker can range from 1:1 to 1:1000, with the most common currency market option being 1:100. In practice, the use of leverage is as follows: you have a $100 deposit and a 1:100 leverage. Now you have $10,000 in your trading assets, i.e. the deposit is multiplied by the second digit of the ratio.

Big investors prefer to trade with small leverage, sometimes it is only 1:10, and in some cases, even 1:1. And this is not a fad for some rich people, but a way to reduce the risk of foreign exchange transactions.

The use of leverage has both advantages and some drawbacks. The basic rule is that increasing leverage increases both profits and losses.

The amount of funds in the margin account is insurance to cover unsuccessful transactions, so its balance cannot be negative.

If this happens, you will receive a “margin call” through which the broker will require you to either add more money to your account or close the open position. In most cases, brokers will automatically close a trade when the margin balance falls below the amount required to maintain it.

Forex trading as a career

Why a career as a foreign exchange trader is so popular lately?

Over the past two decades, financial markets are accessible to more and more people, and trade opportunities are increasing. Forex trading is a choice for both beginners and experienced professionals alike. This career is often perceived as an easy job for making money, but the truth is that it is quite engaging and requires substantial knowledge.

Being a foreign exchange trader has its disadvantages, such as high risk and volatility, but if you devote your time and resources to educating yourself, the benefits definitely take precedence.

There is no other market with so many participants. The large volume that is traded daily ensures high liquidity of the invested assets. You don’t have to wait here. By pressing a few buttons, you can buy and sell currency instantly. Even sizeable foreign exchange transactions are easily and efficiently executed without much impact on the price of the foreign exchange.

Usually, Forex trading has a very low cost of trading commissions and brokerage. Brokers earn from the spreads they set, i.e. the difference between the bid price and the demand.

Compared to the Stocks, Futures, or options market, the forex market requires much less initial capital. Anyone could start trading currency by opening a “mini” or “micro” account with $25 or $50. Leverage in Forex trading is high, which essentially means “borrowing money” from your broker in order to trade more than actually deposited funds. So your minimum investment could go a long way.

The Forex market is open 24 hours a day, five days a week, so it is up to you to decide when the most convenient trading time is for you. Trading starts on Sunday evening and ends on Friday evening. However, you should keep in mind that the market closes only for retailers. Central banks and related organisations continue to transact, and therefore there might be a difference in price between Friday close and Sunday open – known as a gap. That means that you have to be careful with risk management and put some stops and limits in place.

Final words: Forex is the largest market in the world. Retail Forex traders can have a higher quality of life and achieve a better balance between personal and professional life. They can enjoy more time with their family, determine their working hours, work from anywhere in the world and travel while they work.

Forex trading is a great way to make a living, but it carries both potentials for reward and high risk. Never ignore the potential risks blinded by high profits. That is the surest way to part with your money. Be smart, educate yourself, and accept the fact that you could lose out on any deal you make.